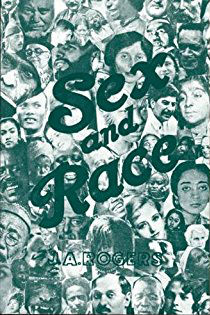 Sex and Race, Volume I: Negro-Caucasian Mixing in All Ages and All Lands: The Old World
by J. A. Rogers

This book is dedicated to a better understanding among all the varieties of the human race. The merest common sense calls for such an understanding. Racial doctrines as they exist today negate intelligence. Indeed they furnish a paradox that exceeds any of the extravagences of Gilbert and sullivan. For instance, we had the great dictators, Hitler & Mussolini, openly saying that "race" is a fraud but cynically using it to unite their gullible followers. At the same time the two great democratic nations, Britan & America, while condeming Fascist and Nazi doctrines, and proclaiming equal justice for all, were using "race" as a fetish to keep their own citizens and sujects divided. White people were set against black peoples by the bogey of miscegenation. The purpopse of this book therore, is to see what and what have gone into the make up of this fearsome "bogey man". We shall see that mankind began as a single family; that the family circle widened and widened until it broke into segments, and with that come the illusion that the segments were no longer parts of the circle. Racial understanding , racial sympathy, is the key to permanent WORLD PEACE.