Wake Up Everybody: The Life of a Player by Jihad Shaheed Uhuru 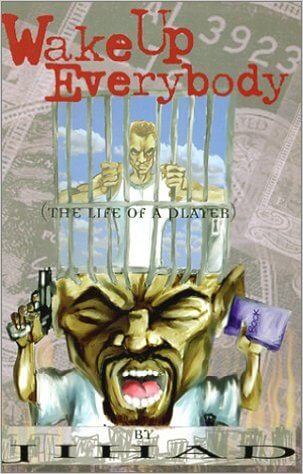 Wake Up Everybody: The Life of a Player
by Jihad Shaheed Uhuru

Read Our Review of Wake Up Everybody: The Life of a Player

Book Description:
Wake Up Every body is an in-depth graphic journey into the struggle of life as a young black male raised by America’s inner city streets. This journey is not only Jihad’s, but documented bits and pieces of every African-American mother’s son’s life. The private lives of so many that have revolved around him as he evolved thru childhood, adolescence and adulthood is profiled. As the merry-go-round of life in the hood is relived, explanations will become evident as to what sets the stage for the events and circumstances that lead so many to the prison-gates. A vivid colorful picture is painted throughout of the how and why Black men in America raised in the inner cities, fortunate enough to live past the age of eighteen are conditioned to accept the inevitability of prison. Growing up in an environment where happiness is sought in the bottom of liquor bottles, needles and dope sacks is just ordinary life in the hood. Through several edutaining sub-stories the fine line between user and dealer, and how they use the same means to get to the same ends is profiled. Whenever one tries to break the cycle, it will become as clear as my words in writing as to how unseen hands pull at him to continue the course he was conditioned to complete, bombard him. First hand accounts of the black cultural documentary like revolving doors of ignorance and how the school system perpetuates the black man’s American Dream (life as a player, hustler, thief, drug dealer and wannabe pimp) is entertainingly analyzed. Travel into the world of a dope addict. Make the introduction to several self-empowered revolutionary freedom fighting black men that are deemed as poison in today’s society, men that will never be given a second chance to give back so much that has been missing. Hold steadfast to something strong and real as the harsh reality of life, and it’s dizzying revolutions and evolutions as seen through the eyes of one young black male is detailed in various stages such as project, penthouse, hospital and penitentiary life. Take a first hand look behind the walls and fences of America’s slave prison system, where you can seen what about 37% of all black males from ages 17-29 experience in this country. Shown throughout is how our socio-economic conditioning controls the masses of the people. This is a story of tragedy, love and of hope: A story of slavery and freedom. This story is based on my life growing up in Indianapolis, Indiana and Atlanta, Georgia in the 1970’s, 80’s, and 90’s. In rare occasions, other people’s experiences are intermingled, specifically ones that had a strong impact on my life. The ending is totally fiction, due to the fact that this book was completed a short time after being released from Americas slave system, also known as its prison system.