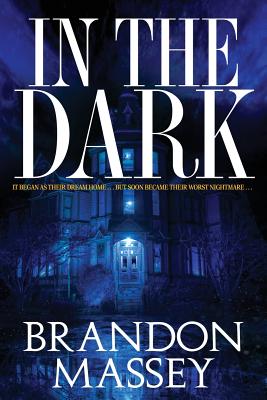 In The Dark
by Brandon Massey

Book Description:
It began as their dream home . . . but soon became their worst nightmare . . . Len and Olivia Bowden had been seeking the ideal home in which to raise their daughter, Kennedy. The classic Victorian in a historic Atlanta neighborhood had everything they were looking for: lots of room in which to grow, friendly neighbors, and best of all, a bargain price, the result of a bank foreclosure. Hardly able to believe their good fortune, they move in and begin making plans for a promising future. Then the stranger arrives at their front door. An elderly man, strong and imposing in spite of his age, he claims that a con artist deceived him in a mortgage deal, leading to the foreclosure on the house into which they’ve moved. He asserts that the property still rightfully belongs to him—and he demands that they move out within three days. Or else. When they refuse to give in to his demands, they are confident the incident will blow over, and they take reassurance in their legal rights to the home. But the disturbing confrontation with the old man is only the beginning . . . Doors open and shut on their own. Footsteps creak across the old floors. And young Kennedy is convinced that she sees monsters lurking in the shadows . . . As the incidents worsen, they realize that their very lives depend upon finding out what’s really going on. But once they finally discover the shocking truth about the old house and its mysterious former resident, it may already be too late. A gripping thriller that deftly explores the supernatural invading the lives of an ordinary family, IN THE DARK is Brandon Massey at his riveting best.

More books like In The Dark may be found by selecting the categories below: