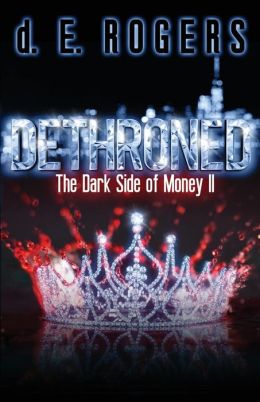 Dethroned: The Dark Side of Money II
by d. E. Rogers

It was an epic, fierce, fight which left many deaths in her path, and when the smoke cleared Gloria had lost her crown jewel, The Gloria Dean Company. As with most dynasties, all it takes is one small crack and the downfall begins. Gloria s small crack was her step-mother, Alexis, who was also her daughter, Jaymee s biological mother. Alexis had turned Jaymee against her and within days her dynasty was gone. Gloria did what she knew best and destroyed Alexis, but she also permanently ruined her relationship with Jaymee. With her biological mother dead, Jaymee picked up the vengeful fight against Gloria, even though Gloria was done fighting. But when one of Gloria’s children is hurt violently, in lieu of her, Jaymee looks like the culprit. Gloria begins to fight fire with fire. Enlisting Jasmine to lead the way, they craft out a plan to destroy Jaymee and take back their fashion empire. Out for blood, old and new enemies strategize to see the head of the company dead. By any means necessary, whoever sits in the Queen’s chair will be Dethroned by a bullet.

More books like Dethroned: The Dark Side of Money II may be found by selecting the categories below: