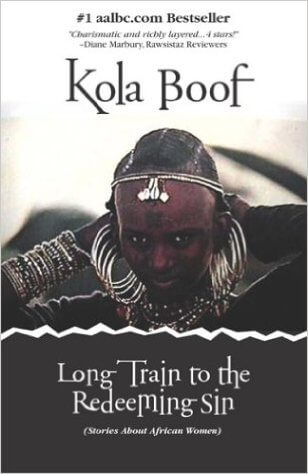 Long Train to the Redeeming Sin: Stories about African Women
by Kola Boof

Read Our Review of Long Train to the Redeeming Sin: Stories about African Women

Book Description:
"In the book of the women they are dark and light, wide and shapely, thin as reeds their hair eats the sun and their eyes swallow the moon these are Black Women the daughters of the earth’s first garden. The mothers of God. These are the stories that remind us where we came from and why we came stories that make us laugh make us mad as hell make us want to cry make us want to get up and eat. These are our reflections. Our love and dreams, our sexual longing and prayers. Our goodness. Our deep eternal beauty". IN JANUARY of 2003, unfortunately, the original African publisher of this book was firebombed by Arab Muslim fundamentalists who were outraged with Boof’s earlier works, as well as this one. The book went out of print and Kola Boof was let go by the publisher. Although more than 100 newspapers around the world reported the firebombing of Kola Boof’s publisher…only one (The New York Post) reported the story in the United States, and although the Sudanese born Kola Boof is an American citizen…there was virtually no concern for her situation from either the American writer’s community or from American media, including black media outlets such as Essence Magazine, Black Issues Book Review or BET. Cornel Chesney, an African American businessman in Southern California became aware of Kola Boof’s predicament through her sensational appearances on singer Stevie Wonder’s KJLH RADIO program "The Front Page" hosted by renowned radio journalist Carl Nelson and immediately offered to start a publishing company for the sole purpose of publishing Kola Boof’s works and bringing this important feminist, Afrocentric masterpiece back into print. This reissue of "Long Train to the Redeeming Sin" joins two other powerful works by Kola Boof, "Nile River Woman" and "Flesh and the Devil: A Novel"…as American raised author’s first books released in the United States, the nation of her citizenship. Other fine work by Kola Boof can be found in Stephen Elliott’s masterful short story collection, "Politically Inspired" where Boof appeared alongside Charles Baxter, Stuart O’Nan, Z.Z. Packer, Elizabeth Tallent, Anthony Swofford and Brian Gage.

More books like Long Train to the Redeeming Sin: Stories about African Women may be found by selecting the categories below:

Tell us what do you think about Long Train to the Redeeming Sin: Stories about African Women.