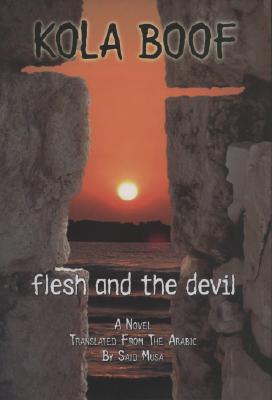 Flesh and the Devil
by Kola Boof

Book Description:
By turns…erotic…melodramatic…violent…and (sniff) "LITERARY"…Kola Boof’s 1995 Arabic novel finally arrives in the hands of the people she wrote it for…the Black Americans…thanks to Egyptian poet/activist Said Musa’s winning translation. Billed by the publisher as: "essentially the story of the Black Americans"…the novel unfolds like an tempestuous, languid snake dance, both in Africa and the United States…"abruptly" spanning several thousand years in the passionate, uncontrollable longing between one black man (Prince Shango Ogun) and one black woman (Princess Ife Ife). Encompassing everything from slavery to ancient homosexuality to women being raped by the Moon…the novel begins during West Africa’s Story of Creation and from there shows off the thriving kingdoms of West Africa before moving on to the Atlantic Slave Trade and finally…to modern day Black Americans in Washington, D.C. and Sag Harbor—at which point the dark skinned African Prince and Princess have now become "light skinned" Americans named Shane Roberts and RooAmber Childress—both married to white people. It’s a sensuous, melodramatic, brutally VIOLENT novel made high pitch by showy characters like the glamorous Queen Ambi, the heroic King Katanga, Shane’s modern day "white wife" Rosaria and RooAmber’s tender homosexual protector in both ancient and modern times—Dinari—who has a romance of his own. The book is not as literary as Boof’s now classic short story collection "Long Train to the Redeeming Sin", which has recently gone back into print, but as an early work it showcases both her campy qualities and her anger "undistilled" (Watch Out!). Only Kola Boof can remind one of Susan Sontag, Jackie Collins, Toni Morrison and Jacqueline Susann all at the same time. Kola Boof acknowledges in the book’s touching AFTERWORD that she is not a West African but a North African woman from Sudan, and that it’s her experience being raised by Black Americans in Washington, D.C. that moved her to write a book about their ancestors and the GREAT LOVE and NOBILITY that the Black Americans come from. Still, as a "Kola Boof book", it’s bound to cause controversy. It was refreshing but breath-stopping, for instance, to read detailed accounts of the American slave trade from an African woman’s viewpoint. Well, I’m off to visit the book’s enchanting Pink Lake in Senegal. Can’t wait to see it. —Ivan Richards, Editor

More books like Flesh and the Devil may be found by selecting the categories below: