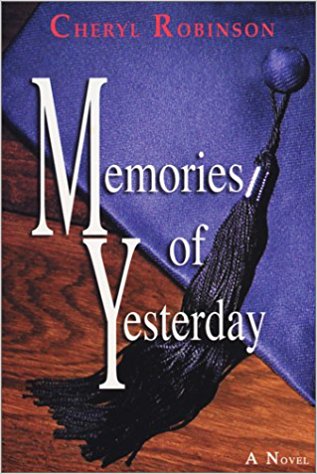 Memories of Yesterday
by Cheryl Robinson

Paperback Description:
Porter Washington is a handsome Detroit Firefighter trying to live on twenty-seven thousand dollars a year while struggling to provide the materialistic lifestyle required of his longtime girlfriend, Reesey. When a lie ends Porter’s current relationship, he becomes confused and questions himself, his sexuality, and the secrets that he buried with his brother. After being dumped at the altar, Winona Fairchild packed her bags and fled Detroit for Fort Worth, Texas, with a man she barely knew. Now, seventeen years and two kids later, single Winona is embarking on a new career as an automotive designer for a major corporation. Excited with her recent promotion, which doubles her salary and allows her to relocate back to her hometown of Detroit, Winona decides to use the opportunity to hunt down a part of her past of which she refused to let go. Winona eventually discovers that true to form with her life, things are never quite the way they seem. Memories of Yesterday is a novel for every man and woman who has hung on to pain and regret too long, postponing an opportunity for a better today and tomorrow.

More books like Memories of Yesterday may be found by selecting the categories below: