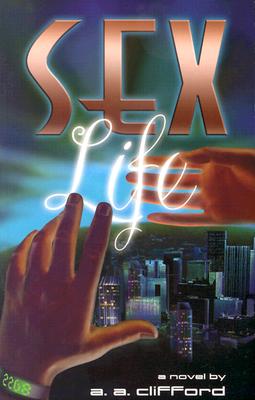 Sexlife: A Novel
by A. A. Clifford

Paperback Description:
Once, the word sex-life had had a meaning. Now there is no life without sex, and within this life, there is no sex as we once knew it. No one had a sex-life anymore. You were having either one or the other. New York City, 2268 A.D. Our world is a social utopia; a place where intellect and talent are the prizes of the day. The subways fly, the taxis have legs and science has advanced humankind to a level where there is no poverty, no crime and no strife. But if you don’t have sex five times each day, you will die. All human beings have a disease called CMB which forces them to copulate repeatedly or perish. This ailment has also destroyed the connection between sex and pleasure, turning the act into simple biological maintenance. People are now fragile creatures, unable to reach even the simplest of emotions. Joe is a typical resident of First City, once known as New York. His peaceful life changes after a fateful encounter with Vella, a mysterious and alluring woman. Their union results in a miracle which takes them to erotic passion, ultimate danger, and a truth that will forever change the world’s belief in sex and the meaning of life that was once tied to it. a.a. clifford’s controversial, thought-provoking story of the future defies genre and comparison. SexLife paints an unforgettable picture of a world of societal perfection without carnal pleasure. This is the first installment of mr. clifford’s SexLife trilogy. This edition contain the first chapter of the next installment: Escape To Sex.

More books like Sexlife: A Novel may be found by selecting the categories below: