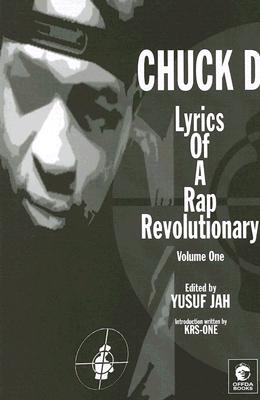 CHUCK D: LYRICS OF A RAP REVOLUTIONARY
by Yusuf Jah

Book Description:
The power is in the mic, and the power has been unleashed in clubs, arenas, stadiums, stages, and parks all over the planet. MC’s are able to connect with its audience in a way that the music alone cannot. Hip Hop, via the MC, has undoubtedly become the voice of a new generation. Much attention has been paid to the staggering impact hip hop music and culture has had on the greater American and world cultures; its influence on fashion, television, advertising, and the attitudes of the world’s youth. However, not nearly as much attention has been paid to the social and political impact that the art form and its artists have had. Lyrics of a Rap Revolutionary is designed to transcend rap and venture into the realm of offering commentary and analysis into some of the deeper aspects of life itself. As one of rap’s preeminent political and social groups of all time, front man Chuck D offers direct explanations and interpretations of what his lyrics are about as a tool to help set minds free in this "hustle and flow and get rich or die tryin’ times’." Chuck delves into the inspiration and writing of such rap classics as "Fight the Power," "Don’t Believe The Hype," "Can’t Truss It," and "Welcome to the Terrordome." As Chuck D explains, "We must remain mindful that there’s a road to freedom, and resist the embarrassingly popular trend that ignorance and a ghetto mentality, which is cast upon us, is our only food for thought or food for non-thought. As MC’s we must become more responsible and revolutionary in our approach, because we have young people around the globe listening to our every word and watching our every step." Admirers proclaimed him the Bob Dylan or Bob Marley of rap. — Los Angeles Times One of the most politically and socially conscious artists of any generation? — Spike Lee Chuck D is the greatest voice in Hip Hop history as far as social commentary and rhymes for the upliftment of Black people. Chuck D is in a league of his own. — Kool Moe Dee

More books like CHUCK D: LYRICS OF A RAP REVOLUTIONARY may be found by selecting the categories below:

Tell us what do you think about CHUCK D: LYRICS OF A RAP REVOLUTIONARY.