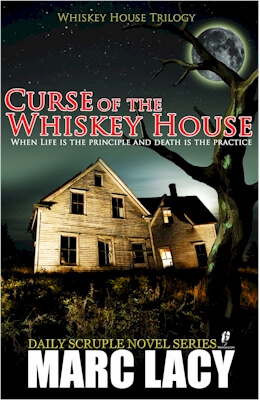 Curse of the Whiskey House: When Life is the Principle and Death is the Practice (Whiskey House Trilogy Book 1)

Learn More about Curse of the Whiskey House.

Jesus once saved Lazarus, but some wonder if the City of Lazarus is beyond saving. This historic Bible Belt homestead located in Hawthorne County, Alabama has a population of 45,000 and is nationally renowned for its fine whiskey. Lazarus, a lively city that was once a resting spot for the Buffalo Soldiers, has a lot of heritage, history, and religion. Maybe too much of each.

The Hawthorne County Whiskey Stop, the city’s most profitable tourist attraction, gets thousands of customers per year from in and out of town. But the Hawthorne County Whiskey House, its counterpart, is anything but good and sacred. Just ask the beloved Mayor of Lazarus, Samuel Justice, who has enough skeletons in the closet to fill the local cemetery. The level of treachery and mayhem spawned within the whiskey house is uncharted despite the fact that Reverend Jackson Jones, the pastor of the Central Baptist Church, owns it. Many believe that a lot of spirits are uneasy and that a curse lingers around Lazarus and Hawthorne County because of the crass circumstances that surround the whiskey house. There’s an old saying around Lazarus, “Once you enter the whiskey house, if you should ever come out, your life goes south.” There is also an eerie prophecy tied to the whiskey house that no one wants to acknowledge; they keep quiet about it hoping it will just disappear. Detective Brock Taylor is the only hope in saving Lazarus from total destruction. But will he be able to extinguish the curse and bring happiness back to the lives that have been maimed by the misgivings at the whiskey house? Or will he be another victim of the devastating curse? This time, even Jesus may not want anything to do with Lazarus…