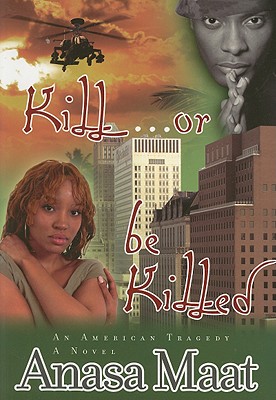 Kill Or Be Killed: An American Tragedy
by Anasa Maat

Book Description:
Following the rebellions in urban areas across America during the latter part of the 1960’s, many American cities fell into despair. Businesses moved out, employment went down, crime went up, and opportunities for success for many young African Americans disappeared. With few options, many young Black men turned to the military. Not waiting for the draft, they enlisted in record numbers to fight for their country in a far away place many of them had never heard of, Vietnam. David Roberts was one of those brave young men who made that choice. The best thing that happened to Roberts during the three years he spent in the Army was that he met and fell in love with the beautiful nurse who befriended him and nursed him back to health after he was injured on a mission. Returning to New Jersey, fully recovered from his physical injuries, but suffering from post-traumatic stress syndrome as a result of his war experiences, Roberts wants nothing more than to be whole again and live a life with Dorothy, who returns his love with a passion. Can Roberts be whole again or will the trauma of war be with him forever?

More books like Kill Or Be Killed: An American Tragedy may be found by selecting the categories below:

Tell us what do you think about Kill Or Be Killed: An American Tragedy.