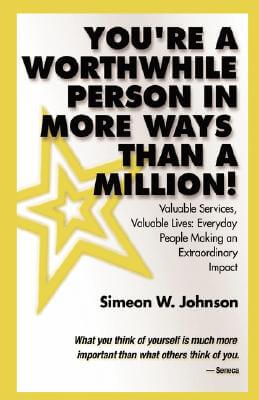 You’re A Worthwhile Person in More Ways Than A Million!
by Simeon W Johnson

Read Our Review of You’re A Worthwhile Person in More Ways Than A Million!

Hardcover Description:
"Simeon Johnson’s exuberant celebration of the ’invisible’ people who make up our society’s support system is nothing short of marvelous. He gives us a unique glimpse into the daily lives of the hardworking men and women around us - people who deserve greater recognition for their invaluable contributions." -Willie E. Gary Willie E. Gary, founder of Gary, Williams, Parenti, Finney, Lewis, McManus, Watson & Speranto, L.C., grew up in a shack he shared with his migrant worker parents and his ten sisters and brothers.The first black male from Indiantown, FL, to attend college, he is now an internationally renowned attorney, multi-millionaire business leader, and philanthropist. "Everyone deserves to be recognized for their contribution, since we each play an integral part in the larger fabric of life. Simeon Johnson captured this beautifully in his book. It’s a wonderful read!" About the Author Prolific author Simeon W. Johnson is a successful entrepreneur with a book and gift boutique: swjenterprises.com. A former radio and television electronics technician, Mr. Johnson has worked as a welder, a shipbuilder, and a housing inspector. He received a master’s certification in radio and TV electronics from National Technical Schools, Los Angeles, CA. He also earned his FCC First Class General Radio and Telephone License, with a specialization in radar applications. Born in Jamaica, West Indies, Simeon is the youngest son of 13 children, with nine brothers and three sisters. Mr. Johnson came to the United States in 1967 and is now a proud U.S. citizen. His books, which are sold on his website and on amazon.com and barnesandnoble.com, are: A Myopic Life Resonated from the Brink of the Abyss; Romw vs. Ramb Reveals God, Adam and Creation; and An Unforgettable Tribute to Our Heroes and Victims of 9/11. Often in demand as an inspirational speaker, Mr. Johnson has been a guest on numerous radio and television talk shows including: XM Satellite Radio, Washington, D.C.; and many others. Book Reviews Cynda Williams Hollywood actress Cynda Williams, who also prides herself on her "keyroles" as a wife and mother, is best known for co-starring with Halle Berry in "Introducing Dorothy Dandridge," co-starring with Denzel Washington in Spike Lee’s "Mo’ Better Blues," and for many other TV movies.

Books similiar to You’re A Worthwhile Person in More Ways Than A Million! may be found in the categories below: