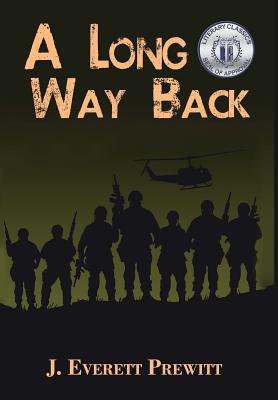 A Long Way Back
by J. Everett Prewitt

Hardcover Description:
When a reporter for the Washington Post sees a group of wounded, half-starved, black troops disembark from a helicopter in Cu Chi during the height of the Vietnam War, he senses a story but receives no cooperation from the army or the soldiers. The men, mostly noncombat soldiers, are the remnant of a squad sent on an illegal mission to Cambodia as punishment for their participation in a race riot at Cu Chi base camp. Led by a battle-fatigued sergeant, they fall under enemy fire. Their leader inexplicably disappears, leaving the ill-prepared soldiers to fight the jungle and enemy on their own. Although forced to confront the shock of combat and a deteriorating family life, the reporter pursues the story hoping to uncover the truth about what happened to those soldiers in the jungle. An intriguing glimpse into the Vietnam War, A Long Way Back is a tense journey merging the lives of the soldiers and the reporter as they struggle to overcome their fear and face the battles they must fight to survive.

More books like A Long Way Back may be found by selecting the categories below: