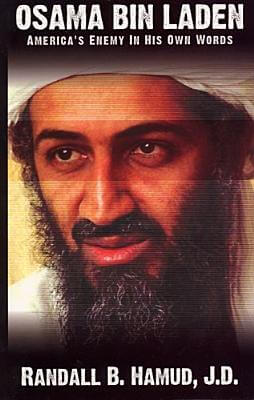 Osama Bin Laden: America’s Enemy in His Own Words
by Randall B. Hamud

Read Our Review of Osama Bin Laden: America’s Enemy in His Own Words

Paperback Description:
Osama Bin Laden and Al Qaeda are the most serious threats to the United States in the contemporary world. Yet, until now Americans knew very little about Mr. Bin Laden. How can they defeat this very formidable enemy if they know nothing about him? As the 4th Century Chinese military thinker Sun Tzu taught, one can defeat an enemy only if one knows the enemy. Taking Sun Tzu’s lesson to heart, this book offers the reader twenty statements from Osama Bin Laden translated into English. It is the first book of its kind to be published in English. The statements were released by Mr. Bin Laden between 1994 and 2004 and are best described not only as a litany of his complaints but also as his plan of attack. For the first time, people whose primary language is English can read the full text of Mr. Bin Laden’s 1996 "Declaration of War on Americans" and his frightening 1998 Fatwa (a religious decree) in which he calls for the killing of American civilians wherever they are found. Americans and English speakers everywhere can also read the transcript of the famous "smoking gun" videotape discovered in November 2001, in which he admits his role in the 9/11 attacks. They can also read the infamous October 2004 statement which presidential candidate Senator John Kerry believes helped the reelection of President George W. Bush. The book is sobering reading. Mr. Bin Laden’s statements comprise not only a litany of complaints but also offer hints at his plans for future attacks against America. As the editor, Randall Hamud, points out, the only people who were not surprised by the 9/11 attacks were those in the United States government whose primary job had been to find Mr. Bin Laden. If Americans had known more about Mr. Bin Laden in the late 1990s or in early 2000, the perhaps they could have pressured their political and military leaders to have done more to stop him before it was too late. The book is also thoroughly documented with over 900 endnotes. For the first time, English-speaking readers can read and understand Mr. Bin Laden’s words in their cultural and historical contexts. In the Introduction and Forward, Mr. Hamud chronicles the life of Mr. Bin Laden, the history of Islamic political thought, and Mr. Bin Laden’s place in the lineage of Islamic political thinkers. Mr. Hamud also addresses relevant elements of Islamic history and the Islamic religion so that the reader will have a full understanding not only of Mr. Bin Laden’s words but also of the roots from which Mr. Bin Laden grew. Especially enlightening is Mr. Hamud’s discussion of Mr. Bin Laden’s brand of Islam: Wahhabism, the dominant Islamic sect in Saudi Arabia. To Wahhabis generally, and to Mr. Bin Laden in particular, Jihad (holy war) is the lifeblood of Islam. Wahhabi creed pulses throughout his statements and gives them deep traction in Saudi Arabia and other venues throughout the Islamic world. Written in understandable English that conveys the spirit and intent of Mr. Bin Laden’s eloquent Arabic, the book is also organized so that Mr. Bin Laden’s statements can be read in any chronological order without sacrificing any knowledge necessary to a full understanding of each particular statement. Moreover, the Table of Contents summarizes each statement and puts them in their respective historical contexts. From Saudi Arabia, to Sudan, to Afghanistan, the reader will learn how Mr. Bin Laden was transformed from a rich playboy into the one of the world’s most dangerous men. In the Epilogue, Mr. Hamud again draws on the lessons of Sun Tzu and uses Mr. Bin Laden’s own words to fashion a prescription for victory in the war on terrorism. Mr. Bin Laden does not hate freedom; rather, he hates discrete policies of the United States and the West that have alienated the vast majority of the Islamic world. Mr. Bin Laden plays to that alienation in his statements. If the policies can be changed, then Mr. Bin Laden’s messages, and ultimately Mr. Bin Laden himself, can be discredited. Mr. Hamud fears that if his prescription for victory is not filled, then the global war on terrorism will morph into a global holy war between Christianity and Islam - a holy war that Christianity cannot possibly win. This book is a must read for anyone interested in defeating Osama Bin Laden and winning the global war on terrorism.

Books similiar to Osama Bin Laden: America’s Enemy in His Own Words may be found in the categories below: