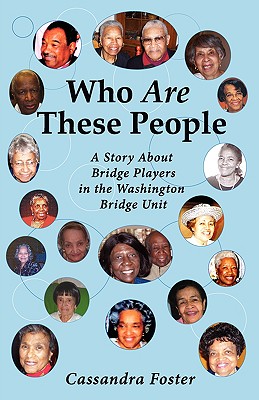 Who Are These People: A Story About Bridge Players In The Washington Bridge Unit
by Cassandra Foster

Book Description:
This book contains stories about African American men and women. They all turned at least 80 years old by May 1, 2008. They have in common membership in a duplicate bridge club—the Washington Bridge Unit where they play the card game bridge. The book contains several stories, with one story for each subject or married couple. The stories are based on taped interviews of the subjects made between May 1, 2007 and May 16, 2008. To help with the time perspective, the date of the interview is at the end of each story. The location point of view is Washington, DC. These people are the trailblazers. They have worked hard. You will find that most of these persons are still active in competitive tournament bridge. Most are currently church members, and most are still quite active in the church. Many are voracious readers, travel extensively, and have other hobbies. They appear youthful and healthy. They are close to their families. The stories in the book tell about the lives of the subjects—when and where they were born, where they grew up, their careers, their families, their struggles, and their philosophies of life. There are pictures of the subjects. The stories include how bridge was introduced into their lives and how they came to be members of the Washington Bridge Unit. Keeping with the bridge tradition, these stories discuss the subjects using their first names. Not only will the reader learn about the lives of the subjects in the book, but also there are interesting parallels in many of the stories about the culture of the US during a certain period. For example, many of the subjects who worked and lived in the south often went north to New York City to pursue advanced college degrees. The Washington Bridge Unit (WBU) is a unit in the Mid-Atlantic Section (MAS) of the American Bridge Association (ABA). In fact, WBU and MAS were forming members of the ABA. The ABA formed in the 1930s. African Americans could not participate at that time in the predominant bridge organization in the US, the American Contract Bridge League or ACBL. ABA came about to fill that void. The stories use either the full name of the bridge organizations or their more commonly used abbreviated forms—WBU, ABA, ACBL. The appendix contains a partial organizational structure of the ABA and the questionnaire used as a basis for the interviews. The names of many bridge personalities can be found in Defining Moments: A 70 Year Chronicle of the American Bridge Association and ACBL’s The Official Encyclopedia of Bridge.

Tell us what do you think about Who Are These People: A Story About Bridge Players In The Washington Bridge Unit.