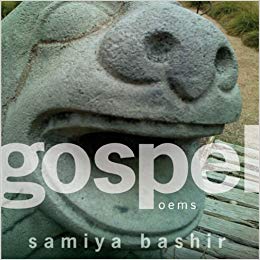 Paperback Description:
Poetry. African American Studies. LGBT Studies. Lambda Literary Award finalist. GOSPEL is an ecumenical resistance song in four parts. In this passionate follow-up to 2005’s Lambda Literary Award finalist, WHERE THE APPLE FALLS, Bashir’s poems challenge truth to stare down the power of fear and paralysis. "We intended gospel to strike a happy medium for the down- trodden," said gospel music pioneer Thomas Dorsey. "This music lifted people out of the muck and mire of poverty and loneliness, of being broke, and gave them some kind of hope anyway. Make it anything but good news, it ceases to be gospel." The good news, according to Bashir, is that we are neither alone in our mess, nor alone in our grasp of the tools to heal. In this pull-no-punches collection Bashir lays down a road map, a portable flashlight, and a shaky-legged escort to usher the way toward recovered sight and strength.

"’How is it done— / remolding body into / image of body,’ writes Samiya Bashir in the poem ’Topographic Shifts,’ from her latest book, GOSPEL (RedBone Press, 2009). The poem describes an amputation performed on a baby girl born with twelve fingers and toes, but these lines make me think, of course, about the pressure so many women feel to alter our bodies: how the ’image of [the idealized] body’ worries, haunts, maims. What I love about Bashir’s work is how her poems work against this enforced correcting. Many of her poems thrum with the erotic joy of queer black bodies, and her work celebrates the lived experiences of bodies that resist ’remolding.’"—The Kenyon Review

"Bashir gathers stories and language from a range of cultural locations and weaves them into the imagistic and sonic qualities of the poems. The Norse gods make a dramatic and cacophonous appearance and, in one of her most effective rhetorical moves, Bashir utilizes a Ghanian call and response sequence that both effectively heightens the drama and energy in the poem and then brings it to rest at its conclusion. The poems of GOSPEL are rife with layered meanings while they immerse the reader in a landscape that is both familiar and reassuring as well as deeply unfamiliar and strange."—Lambda Book Report

"Gospel music, like its secular cousin the blues, never wallows in pity, but instead seeks to transcend pain and reach glory. Bashir’s book makes the same trip.it’s the word’s original meaning that I think Bashir best exemplifies in this book—good story or message—because GOSPEL is, at heart, a collection of poems that suggest we are not alone in this mess of a world."—The Rumpus

Books similiar to Gospel: Poems may be found in the categories below: