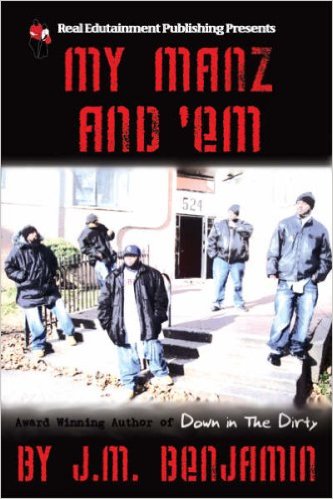 My Manz And ’Em
by J.M. Benjamin

Book Description:
Growing up in the West Second street housing projects, in Plainfield, New Jersey, Malik Jones has based his life and reputation in the streets on loyalty. The son of a hustler, yet fatherless, he is raised by a single, working, mother of three. Malik’s life is impacted by these circumstances as he easily become influenced by his surroundings at a young age. Teaming up with neighborhood friends, Malik climbs the criminal ladder, gaining instant status in the streets. Now a seasoned veteran in the game, Malik is ready to take he and his crew to the top until he is taught a valueable lesson. After an inevitable prison sentence, finding himself and religion, Malik is returning to the streets with the intent of climbing a new ladder and taking a better path then before. With a new outlook on life, in the process, Malik is even able to discover real love. But as with anything else in life, you must crawl before you can walk. See what Malik Jones is faced with as he struggles to crawl in a world where it seems the deck is stacked against him…Especially after he runs back into his Manz And ’Em!

Tell us what do you think about My Manz And ’Em.