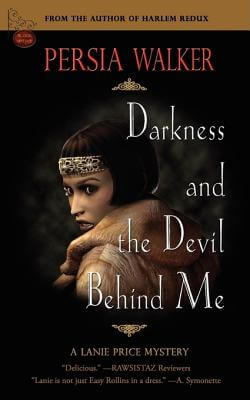 Darkness And The Devil Behind Me
by Persia Walker

Paperback Description:
The devil claimed Esther Todd. Or so they say. In December 1923, she was a lovely young pianist, a rising star. By January of ’24, she was on the most wanted list. She’d vanished along the snowy streets of a storm-swept night in Harlem and thieves had hit the home of her society patron, pulling off a million-dollar heist. Were the disappearance and robbery coincidence or conspiracy? Somebody knew, but nobody was talking. Three years later, the puzzles remained unsolved. Crime reporter Lanie Price covered the initial case. Now a frustrated gossip columnist, she’s ready for a change. It comes in the form of Esther’s sister, Ruth. Desperate for closure, Ruth begs Lanie to dedicate her Christmas column to the case. maybe someone, somewhere will remember something. Seeking fresh material, Lanie starts asking hard questions, dangerous questions, the kind just about guaranteed to get her killed.

More books like Darkness And The Devil Behind Me may be found by selecting the categories below: