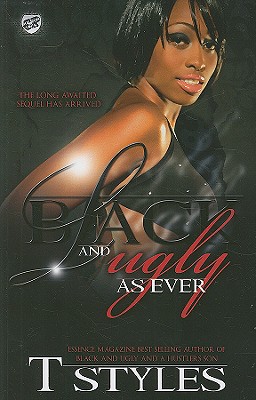 Black & Ugly As Ever
by T. Styles

Read Our Review of Black & Ugly As Ever

Paperback Description:
The gang you fell in love with returns from the street classic Black & Ugly! Parade Knight finally gets what she wants, a man of her own, despite hating her own dark skin. But as the nights grow longer and her sexual encounters become more frequent with her fiance Smokes, she wonders why she still can t seem to get her old flame Jay Hernandez off her mind. Faced with choosing between the man who proposed and the man she loves, she doesn t see a set-up coming, but it may be too late. Daffany s heart is heavy as she battles with the disease that haunts her body, and the poison she places in her blood. But when she s unable to afford her drug of choice, she s given a cheap alternative and it takes her on an all time high. Miss Wayne s colorful antics go to the next level as he fights to keep their friendship together. But when it becomes apparent that he s all alone in his efforts, he wonders if they ll ever be the same. Black & Ugly As Ever is a warm street tale with a coldhearted truth. That if you don t pick yourself up when you fall, you ll be a doormat for others. You ll laugh, cry and feel a part of these childhood friends lives as they dodge danger to keep things together. This beautiful sequel has finally arrived!

More books like Black & Ugly As Ever may be found by selecting the categories below: