The Supreme Team: The Birth of Crack and Hip-Hop, Prince’s Reign of Terror and The Supreme/50 Cent Beef Exposed (Street Legends) by Seth Ferranti 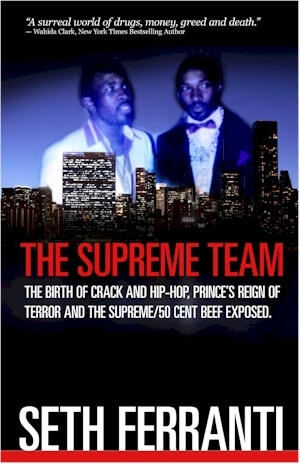 The Supreme Team: The Birth of Crack and Hip-Hop, Prince’s Reign of Terror and The Supreme/50 Cent Beef Exposed (Street Legends)
by Seth Ferranti

Book Description:
When the crack era jumped off in the 1980s, many street legends were born in a hail of gunfire. Business minded and ruthless dudes seized the opportunities afforded them, and certain individuals out of the city s five boroughs became synonymous with the definition of the new era black gangster. Drugs, murder, kidnappings, shootings, more drugs, and more murder were the rule of the day. They called it The Game, but it was a vicious attempt to come up by any means necessary. In the late 1980s, the mindset was get mine or be mine, and nobody embodied this attitude more than the Supreme Team. The Supreme Team has gone down in street legend and the lyrical lore of hip-hop and gangsta rap as one of the most vicious crews to ever emerge on the streets of New York. Their mythical and iconic status inspired hip-hop culture and rap superstars like 50 Cent, Jay-Z, Biggie, Nas and Ja Rule. Born at the same time as crack, hip-hop was heavily influenced by the drug crews that controlled New York s streets. And the clich of art imitating life and vice versa came full circle in the saga of the Supreme Team’s infamous leaders- Kenneth Supreme McGriff and Gerald Prince Miller. In the maelstrom of the mid-80s crack storm and burgeoning hip-hop scene, their influence and relevance left a lasting impression. Going from drug baron to federal prisoner to hip-hop maestro to life in prison, Supreme was involved in hip-hop and the crack trade from day one. His run stretched decades, but in the end he fell victim to the pitfalls of the game like all before him had. His nephew, the enigmatic Prince, who had a rapid, violent, and furious rise in the streets also fell hard and fast to the tune of seven life sentences. The Supreme Team has been romanticized and glorified in hip-hop, but the truth of the matter is that most of their members are currently in prison for life or have spent decades of their prime years behind bars. This book looks at the team s climatic rise from its inception to its inevitable fall. It looks at Supreme s redemption with Murder Inc. and his relapse back into crime. This book is the Supreme Team story in all its glory, infamy, and tragedy. It s a tale of turns, twists, and fate. Meet the gangsters from Queens where the drug game influenced the style and swagger of street culture, hip-hop and gangsta rap and made the infamous cast of characters from the Supreme Team icons in the annals of urban lore.

More books like The Supreme Team: The Birth of Crack and Hip-Hop, Prince’s Reign of Terror and The Supreme/50 Cent Beef Exposed (Street Legends) may be found by selecting the categories below: