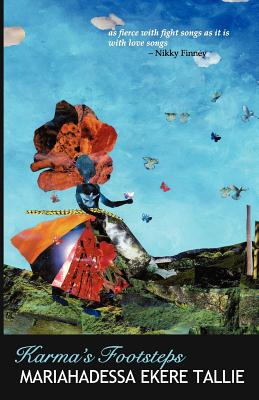 Paperback Description:
Somebody has to tell the truth sometime, whatever that truth may be. In this, her début full collection, Mariahadessa Ekere Tallie offers up a body of work that bears its scars proudly, firm in the knowledge that each is evidence of a wound survived. These are songs of life in all its violent difficulty and beauty; songs of fury, songs of love. ’Karma’s Footsteps’ brims with things that must be said and turns the volume up, loud, giving silence its last rites. "Ekere Tallie’s new work ’Karma’s Footsteps’ is as fierce with fight songs as it is with love songs. Searing with truths from the modern day world she is unafraid of the twelve foot waves that such honesties always manifest. A poet who "refuses to tiptoe" she enters and exits the page sometimes with short concise imagery, sometimes in the arms of delicate memoir. Her words pull the forgotten among us back into the lightning of our eyes." -Nikky Finney

More books like Karma’s Footsteps may be found by selecting the categories below: