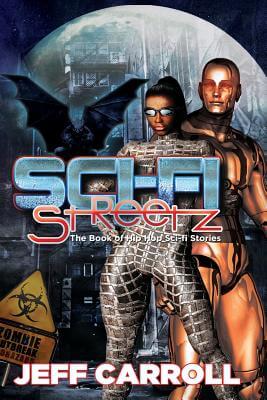 Paperback Description:
The world of Science Fiction is so expansive that once I stepped into this world I wanted to write about everything. In this book I chose some of my favorite areas under the Sci-fi umbrella to write stories in Revisionist History, Robots, Gargoyles, Demons, Horror, Time Travel, Space Travel, Futurism, Pirates, Werewolves and Military Sci-fi. This book is written with the Hip Hop generation in mind because they are the future and Sci-fi fuels the imagination. Sci-fi pushes the imagination and makes people dream. Many young people have so much drama in their lives they only think about the happenings of today’s world. They rarely think or dream about the future or enjoy the escapism that Sci-fi provides. If you can dream it you can achieve it and I wonder if you don’t dream what will you achieve? The stories in this collection are: Nightmare on Halloween Camp: follows the story of Maurice and Eni from Thug Angel Rebirth of a Gargoyle. In this story Maurice has to transform into his gargoyle form in order to rescue Eni (his daughter) from a demonic entity. The Screaming: tells the story of a werewolf who has learned to control his transitions through a strict vegetarian lifestyle. When gang violence erupts in the community surrounding the college he works at, things go horrible wrong. The Voyage of the Blackstar: is the first part of a series of stories following a group of African pirates as they wage war on European slave traders and they lay claim to the Caribbean. Escape From Hell, American Gangstress: This is a hardcore version Harriet Tubman’s story. In this story Harriet finds a family in the woods as they escape slavery. The Church of God and Space: This follows a group of church missionaries as they go on their first journey. After experiencing everything that can go wrong in their travel through space they have a rude awakening when they reach they destination planet. The Programmable Man: In the future everyone has robot for security. However when a program is developed that can turn these security robots into the ultimate love machines people find out love is a very strong emotion. A Robot’s Nightmare: by Malcolm Carroll: A robot is sent into battle and his report changes the course of the war. Interview of a Monster: This is an up close and personal look at a slave who is the top barnyard bareknuckle fighter. A story of courage and pride, of love and pain, of hope and fear, and of the promise of a better world. Tired of Dying: Just a couple of guys surviving a zombie apocalypse who have a different take on life. Ass kicking Time: When you have the to ability to travel through time you realize there is time to do different things. There is time to love and time to hate, to make people feel good and time to feel pain. The Girl from Negro Mountain: This story follows Destiny who survived the tragic death of her parents. Now on her way to a group home she learns the supernatural powers that protected her on Negro Mountain may not have been exclusive to the mountain.

More books like Sci-Fi Streetz: The Book of Hip Hop Sci-fi stories may be found by selecting the categories below: