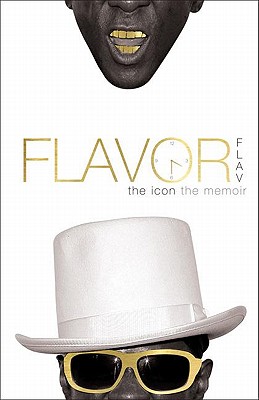 Flavor Flav: The Icon The Memoir
by Flava Flav

Hardcover Description:
From his twenty-five years as a member of one of the most influential hip hop groups of all time, to his career as a television personality, the word that best describes Flavor Flav is ’iconic.’ Clock-wearing, colorful and sometimes controversial, William Drayton?known affectionately all around the world as simply ’Flav’?finally tells all.

In this compelling memoir, Flavor Flav takes the reader in vivid detail behind the scenes of his multi-faceted career. He spares no one, revealing the tensions within Public Enemy and with Def Jam records, his struggles with addiction, his multiple visits to both rehab and to jail before re-inventing himself in reality television as VH1’s most eligible?and most watched?bachelor. Taking readers on a journey into the truth behind his bigger-than-life image, Flavor Flav’s presents his unique perspective on music and reality TV— how he survived the pressures of both to become one of the most-sampled and recognized figures in media.Told with the gritty, compassionate and often-hilarious style that has made the man a legend, this memoir is a thrill ride from the heights of celebrity to the depths of despair and back again to tell the tale.

More books like Flavor Flav: The Icon The Memoir may be found by selecting the categories below: