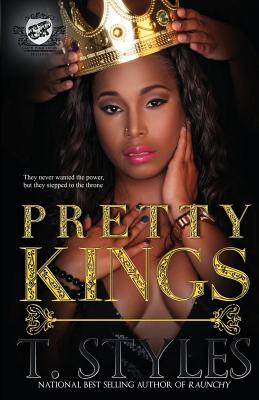 Paperback Description:
BET called ’Pretty Kings’ a must read! The Pretty Kings became the most notorious drug lords in the United States. This is how their reign begins. Bambi and her sisters in law have it all. They are married to brothers of the highly respected Kennedy family, rich and hopelessly in love. As promised, the Kennedy Kings decide to get out of the drug game, after, a one hundred million dollar meeting with The Russians, whom they never met personally. First, the Kings have to return home from LA. But, while in a casino, something so devastating occurs, which their wives witness via video calling, that changes the wives lives forever. The next day, emotionally beaten, Bambi remembers the meeting with The Russians that is to take place on Saturday. Although grieving, she considers how life will be without her husband and penniless. Bambi tries to facilitate the meeting without their husbands but is unsuccessful. The Russians are expecting the Kennedy Kings only. Not wanting to miss and opportunity to take care of her family for the rest of her life, Bambi comes up with a plan. However, for this plan to be executed, the wives would have to take over their husbands identities. They must become the Kennedy Kings. If it works, they will continue to afford the lifestyle they are accustomed. If not, they might suffer a fate so brutal, death would be better.

More books like Pretty Kings may be found by selecting the categories below: