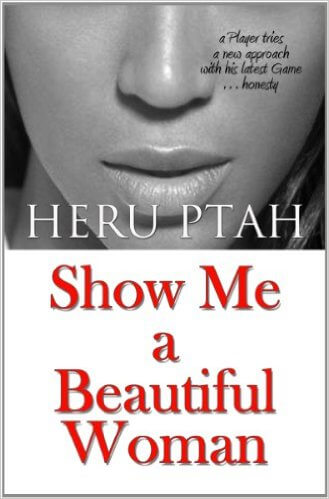 Show Me a Beautiful Woman
by Heru Ptah

Book Description:
Alex is addicted to newness: new clothes, new cars and especially new beautiful women. He doesn’t work preferring instead to live off the kindness of women and he lives well. He would seem to be enjoying every man’s dream life but something is wrong. It’s all getting too easy and he’s getting bored. He’s beginning to lose interest in women that is until he meets Zawe. Zawe is just coming off the break-up of her engagement. Her boyfriend of six years cheated on her and she’s both angry and confused. She doesn’t understand why men do the things they do and why they treat sex so flippantly? Though she is attracted to him, she won’t allow herself to fall for Alex. So Alex makes her a bet that within a month they’ll have sex. And what does she get for going along with this bet . . . he’ll answer truthfully all of the questions she’s ever had about men. But there is mainly one question she really wants to know. Why do men cheat?

Tell us what do you think about Show Me a Beautiful Woman.