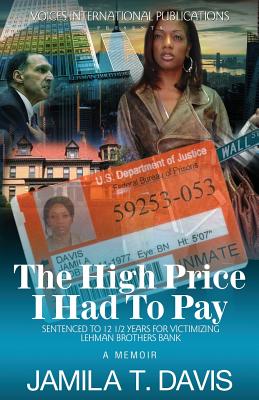 The High Price I Had To Pay: Sentenced To 12 1/2 Years For Victimizing Lehman Brothers Bank
by Jamila T. Davis

Paperback Description:
The High Price I Had To Pay is a captivating real-life story that reveals another aspect of the inside fraud perpetrated by Lehman executives that has yet to be told!
Years before the 2008 Financial Crisis, a major epidemic of mortgage fraud surged throughout the country. The FBI geared up to combat the problem, imprisoning thousands who alleged to have victimized Wall Street giants, such as Lehman Brothers. Hidden safely behind the auspices of being a "victim," savvy Ivy League bank executives created additional fraudulent schemes to further their profit. Utilizing their "victimizers" as scapegoats, the bankers’ clever plan went undetected. Consequently, the real architects of the massive fraudulent lending schemes escaped unpunished. And the "small fries," who the bankers blamed, were left to do big time!
This illuminating synopsis by author Jamila T. Davis, who is currently serving a 12 Year sentence in federal prison for bank fraud, is shared from a unique standpoint. Davis was labeled by Lehman attorneys as the 25 year old mastermind who devised an elaborate mortgage scheme that defrauded their bank of 22 million dollars. Her shocking story captures the inside tricks of Wall Street elite and takes you up-close and personal into a world driven by greed and power.
Davis’ story will leave you amazed and make you think. Have savvy Wall Street executives, such as Richard Fuld, been able to out smart the world? And while these executives escape unpunished, is it fair that "small Fries, "like Davis, are left to do big time?

More books like The High Price I Had To Pay: Sentenced To 12 1/2 Years For Victimizing Lehman Brothers Bank may be found by selecting the categories below: