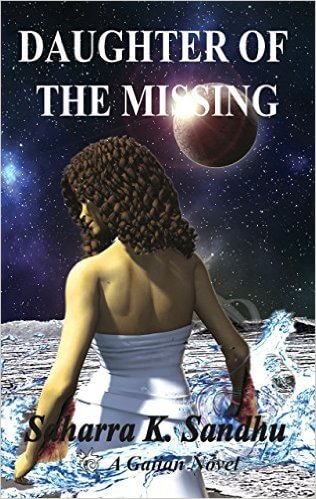 Daughter Of The Missing
by Saharra K. Sandhu

Astronaut Sarai Mathews knows the end is near when a giant wave rolls in and pulls her from the beach. But something strange happens: she doesn’t die. Instead, she lives and breathes…underwater. While in the depths, she meets a handsome man named Jon Luc. According to him, they’re both Gaiians, a race of beings who are equal parts human and earth spirit. Could any of this be true? Is he real and not just someone she dreamt up during the chaotic moments in the water?

For years, Jon Luc has searched for Sarai’s family. They are from a portion of the Gaiians who were lost to slavery and scattered across the Americas. These lost tribe members are called “The Missing.” Now he must keep her enemies at bay because someone else has found Sarai too, and they want to steal her birthright, the phoenix, a mythical creature that only she can capture and control.

Jon Luc will protect Sarai at all costs, but first he has to convince her of her heritage. With enemies on their trail, the pair must work together to harness Sarai’s newfound abilities. As a daughter of The Missing, Sarai will attract the phoenix during her next space mission—and if she can’t get control, it might destroy them all.

More books like Daughter Of The Missing may be found by selecting the categories below: