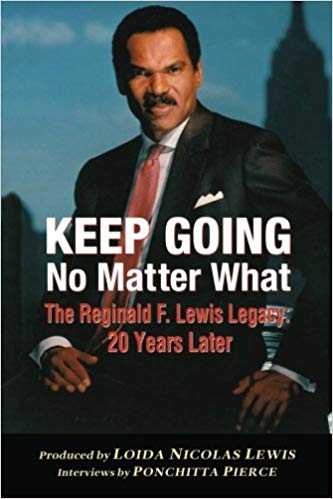 Book Description:
Featuring interviews from some of the most prominent names in today’s business world, this full-color book shares the influence that Reginald Lewis continues to have on many successful and up-and-coming entrepreneurs. "This book is dedicated to the legacy of my beloved husband, Reginald F. Lewis, on the 20th Anniversary of his transition to eternal life. He left us too soon." —Loida Nicolas Lewis November 30, 2012 marked the 25th Anniversary of the purchase of Beatrice International Foods by Reginald F. Lewis. The acquisition by Lewis, at a cost of $985 million dollars, cast the normally publicity shy Lewis into the international spotlight and made the world his arena. Not bad for a guy who grew up in what he once described as a “semi-tough” neighborhood in Baltimore, MD. In Keep Going No Matter What—The Reginald F. Lewis Legacy: 20 Years Later, numerous individuals—some who knew Reginald F. Lewis and others who were inspired by his book “Why should white guys have all the fun?” How Reginald Lewis Created a Billion-Dollar Business Empire—share their compelling stories about how his life impacted theirs. "He was intense. He was focused. His entrepreneurial spirit was inspiring. It was clear that we were hearing from a man who was going to make a difference in the world around him." —Kenneth I. Chenault, Chairman and CEO, American Express LOIDA LEWIS In 1987, Reginald F. Lewis, won the operations of Beatrice International Foods in a $985 million leveraged buyout. It was the largest of its kind at that time. In 1992, he was listed in Forbes Magazine as among the 400 wealthiest Americans. He died of brain cancer, at the age of fifty, in 1993. After his death, Loida served as Chair and CEO of TLC Beatrice International Holdings, Inc. She won over the business community by moving quickly to increase earnings and pay down debt. In 1995, she was on the cover of Working Woman magazine as the “Top Businesswoman in America.” After running the company, she completed the sale of TLC Beatrice, achieving a 35% internal rate of return on investment. Loida is now Chair and CEO of TLC Beatrice, LLC, a family investment firm. A lawyer by profession, she was the first Filipino woman to pass the New York Bar without attending law school in the United States. Loida Nicolas Lewis served for ten years as General Attorney with the Immigration and Naturalization Service and co-authored the best-seller, How to Get a Green Card, now in its 10th edition. A leader in the Filipino-American community, she is one of the founders of the National Federation of Filipino American Associations, the Asian American Legal Defense & Education Fund, the U.S. Pinoys for Good Governance, organized after the election of Benigno Simeon Aquino III as President of the Philippines. A well-regarded philanthropist, in 1998 Loida funded the People’s Alternative Livelihood Foundation of Sorsogon Inc. in her hometown. The foundation has since helped lift 20,000 families out of poverty. She succeeded her husband as Chair of the Reginald F. Lewis Foundation, which has given millions of dollars to educational and cultural institutions. Loida was recently elected to the Board of Directors of the National Catholic Reporter, an independent news organization with a global reach, and the Apollo Theater Foundation. She speaks Filipino, English, French, and Spanish. Loida has two daughters, both cum laude B.A. graduates of Harvard University. Leslie is an actor and playwright, having written “Miracle in Rwanda.” Christina, after a five-year stint with the Wall Street Journal, is a journalist and author of the best-selling Lonely at the Top. Loida has three grandchildren, Christian, Savilla, and Calvin, and two sons-in-law, Gavin Sword and Dan Halpern.