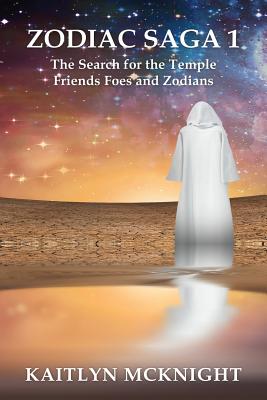 Zodiac Saga 1 the Search for the Temple: Friends Foes and Zodians
by Kaitlyn McKnight

In the year 32 B.C.E, Aries, The Zodian god of Death, had a vision of a malevolent entity. It was evident that the entity would enslave the world and eventually destroy everything. When this news reached the other Zodians, they each stored a portion of their powers into individual Power Gems. The Zodians made this precaution as an emergency power source. The Temple of Zodia was built to store the Gems until the dark day came. The Elders of Zodia thought it was essential to find the entity and destroy it before the vision took place. So they each disguised themselves and lived among mortals on earth. But they became distracted with mortals and earthly pleasures, some of the Zodians married and had children. Almost a century later, Cancer, The Zodian god of Intellect, found himself wandering in the Temple of Zodia. He made an unknown but fatal error and caused the Temple to collapse. The Gems were scattered into different countries, and time periods. The other Zodians easily noticed this incident and Cancer was indefinitely banished from the Temple of Zodia. The other eleven Zodians built another Temple on earth, but hid its location from mortals and Cancer. In the current year, the belief in Zodiac gods by a bullied 12- year- old little boy named Cyrus O’Hara becomes a reality. He sets out on an adventurous journey to find the Temple of Zodia. Along the way he learns his true identity and finds the meaning of family, friendship, and foes. Come along and travel with Cyrus the believer, Peter the great, and the fearless Sofia into the hidden world of the Zodiac gods. Take a ride on a golden airplane. Meet Witch Greta and see the powers of her crystal ball. Meet the frightening Azznic, the metal beast. Meet Snake-y Von Tomb, the keeper of evil doers. Meet Gertrude and Garner, the workers from the afterlife. Meet the bully himself, the ghoulish Judas from the dead. Get to know the alluring daughter of Virgo, Mercy and her magical cat. Above all, meet the Zodian gods. Also known as the Elders of Zodia, and the Sacred Twelve. They are the keepers of the universe. Meet all these characters along with others on the search for the Temple of Zodia. Experience the mysterious world of Zodiac Saga.

More books like Zodiac Saga 1 the Search for the Temple: Friends Foes and Zodians may be found by selecting the categories below: