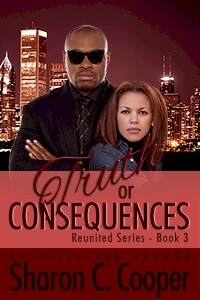 Paperback Description:
Bestselling author Sharon C. Cooper brings you another exciting romantic suspense… Hospital Chief of Staff Natasha Lockham’s life has been all about work and no play. That is until a one-night stand with a man who lives his life on the edge, turns her sexual fantasies into reality. She never expects to see him again, but their paths cross when Natasha suspects an esteemed doctor of committing an unspeakable crime against his patients and danger lands at her doorstep. The closer she gets to the truth, the more she realizes she’s not prepared for the truth or the consequences. Former Navy SEAL, Malik Lewis, will always remember the night he spent with Natasha. It was the single most amazing night of his life. So when Natasha narrowly escapes a brutal attempt on her life, Malik stops at nothing to protect her, including hunting a man whose skills match his. Can Malik and Natasha outsmart a vicious assassin who has nothing to lose? And will they ever get to explore the sizzling passion between them that neither can deny?

More books like Truth or Consequences (Reunited Series) (Volume 3) may be found by selecting the categories below: