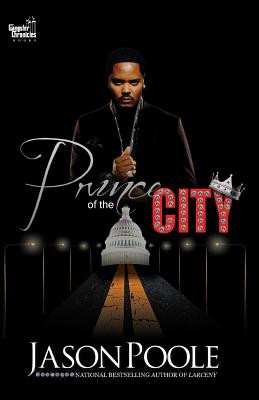 Prince of the City
by Jason Poole

Paperback Description:
Malik Perry is the son of Michael, a ruthless gangster who is regarded as the King of Southeast, one of the worst sections of our nations capitol and infamously known as the concrete jungle . A smart ambitious hustler who eagerly wanted to retire from the game and live a normal life with his wife and son, but something goes wrong before he quits. Malik, the heir to his throne, is too young to understand yet old enough to listen. Now left to be raised by his aunt Linda, a female hustler with connections, Malik takes a journey through life on the opposite side of the city where he becomes equipped with every valuable lesson to be learned on the gritty streets of Washington D.C. In his quest for riches while climbing the ladder of success, Malik meets two people that could ultimately change his mind of becoming the next king. Rico, a friend who’d become the brother he always wanted, and Peaches a love he never knew. Love, trust, and betrayal laced with every ingredient the streets have to offer.

More books like Prince of the City may be found by selecting the categories below: