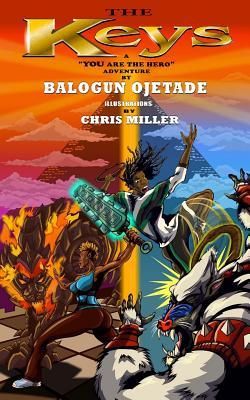 The Keys: A “YOU Are The Hero” Book (Volume 1)
by Balogun Ojetade

Paperback Description:
Pyramids located all over the world, among different cultures and nations are actually portals that allow teleportation between them. For thousands of years, there was peace between nations; there was exchange of knowledge and culture and all of the pyramid cultures worldwide advanced because of it. But the peace soon shattered and the world was cast into the bloodiest and most costly of wars. At the same time, the Iberian Empire, led by Infante (“Prince”) Henry the Navigator, attacked the Aztec Empire. Henry, the Navigator believed the legendary Christian kingdom of Prester John (“Presbytu Johannes”) to be the Aztec Empire’s Nueva Guatemala de la Asuncion (now called Guatemala City). He wanted to find the kingdom and achieve immortality and would murder the world if it meant achieving his goal. The Aztec allied with the powerful Oyo Empire of West Africa and together they defeated Henry the Navigator and his monstrous army and restored a fragile peace to the world, deactivating the power of the world’s pyramids until humanity was once again ready to use their power responsibly. Two gods one Oyo and one Aztec were placed into a deep sleep within the bloodlines of two warrior families from the great Oyo-Aztec Alliance. These gods, lying dormant within two unwitting teenagers known as The Keys, are to awaken only when the world and the gods’ teenaged hosts is ready. YOU choose to be one of the two heroes of the story: Jordan Drummond, college basketball phenomenon and math genius; or Theresa “Terry” De Fuego, self-proclaimed “extreme journalist.” YOU battle the forces of evil and maybe even save the world! YOU decide your destiny… for YOU are the Hero!

More books like The Keys: A “YOU Are The Hero” Book (Volume 1) may be found by selecting the categories below: