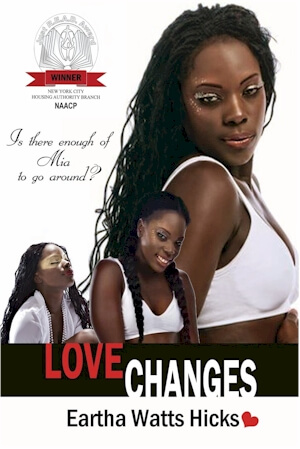 This newly revised edition features a Music Index, a Reading Group Guide and an Excerpt from the next title.

Love Changes, is the tale of a single mother who is eager to marry, despite the fact that she has yet learned to love herself. The fact that her story is also a love triangle makes things a little more interesting. Although this novel has so many elements, I consider Love Changes to be of the African American Christian Commercial genre, an Urban Christian Love Story (not quite Romance) that infuses 80’s and 90’s popular music. This week’s New York Amsterdam News praises Love Changes as being "extremely well-written." And on June 13th, I was recognized with the Just R.E.A.D. Award for literacy in the fiction category from the NYCHA branch of the NAACP. Now, I am hoping readers like it.

Synopsis:
MIA LOVE is a debt collector, living in the Bronx, struggling to make ends meet. She has a newborn baby and has been living with her high school sweetheart, Spence SPIDER Snyder. Now, their baby is three months old, Spider’s still unemployed, and they are still unmarried. Mia’s patience is wearing thin. Will Spider ever get his act together? Will he ever marry her?

Under the scrutiny of her overbearing mother, gold digging sister, and her lifelong friend, ROMELL, a cocky, investment banker, Mia caves and confronts Spider. He tells her, in order to get married, they must first resolve some issues: he’s not at the top of her priorities; she doesn’t trust him; he’s uncomfortable with Mia’s relationship with her male, best friend, and most especially, the fact that Spider’s dead broke. But while visiting his mother’s home, Mia stumbles across a hefty insurance check, and Spider’s the beneficiary.

Sworn to secrecy, she is caught in a web of deception, vengeance, secrets, and lies, stemming from Spider’s father affair that took place before Spider was born—spawning his half brother. JEFF, a compulsive gambler, is being evicted, and the brothers come to blows over insurance money. At her wit’s end, Mia turns to the one, stable person she’s always relied on for support—Romell. But when his solace turns sexual, their relationship spins out of control, and Mia is forced to choose. Will she chose her best friend? Will she lose the man she loves?

Books similiar to Love Changes may be found in the categories below: