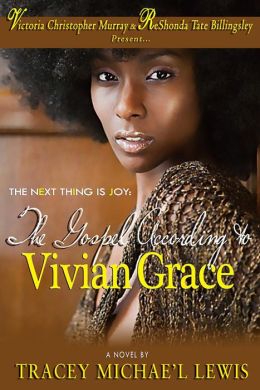 The Next Thing Is Joy: The Gospel According to Vivian Grace
by Tracey Michae’l Lewis-Giggetts

Power to the people… Knowing that she doesn’t want to live a life that lacks significance, Vivian Grace begins working to empower the people in her community. She believes she’s found her true calling as a member of the Black Panther Party in Chicago. What Vivian doesn’t count on finding is love.

All that glitters… But Vivian’s love affair with the charismatic Black Panther Party leader, Reggie, takes a turn for the worse when his abusive side surfaces. To protect herself and her unborn child, Vivian has to commit a cardinal sin in order to escape the relationship alive. She finally finds refuge in the most unlikely of places and begins her long journey toward healing. If Vivian can receive God’s forgiveness and extend the same to those who have hurt her, waiting for her is a love she could have never imagined.

As part of the "Gospel of Grace Women" trilogy, Tracey Michae’l Lewis reveals the genesis of the generational curses that have plagued the Grace women: Sasha Renee, Crystal Justine and the matriarch, Vivian Grace. This story shows how the struggle to choose courage over fear and forgiveness over bitterness is a real but necessary fight.

More books like The Next Thing Is Joy: The Gospel According to Vivian Grace may be found by selecting the categories below: