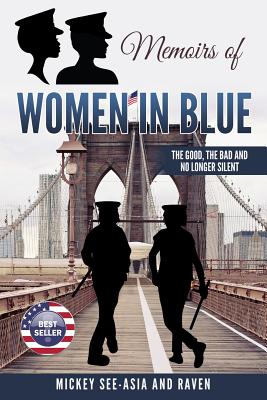 Memoirs of Women in Blue: The Good, The Bad and No Longer Silent
by Mickey See-Asia and Raven

This book contains the memoirs of two female detectives from the New York City Police Department, one who resigned after eleven and a half years of service and the other who retired after twenty years. These two women have seen much, experienced good as well as evil and faced much opposition from their peers as well as persons in the communities, who did not agree with the standards of policing.

These two women come from different socio-cultural backgrounds. They offer you an inside look at what they observed while trying to protect the public. They also dealt with the politics that governed how police officers should act while in the performance of their duty. Furthermore, memoirs expose the reader to the realities faced by female police officers, who, for years have remained silent. Now, the public needs so desperately to interpret the senseless acts of violence that are occurring on an almost daily basis across our country.

Women are becoming more visible in law enforcement, thus exposing them to more violence and intense pressures than what their male counterparts are confronted with. These two female police officers/detectives have overcome their fears and speak of their memories, concerns and even offer possible resolutions for policing the communities of America. While these experiences may seem controversial to some individuals, let them be a reminder to us that we live in a time when law enforcement and communities are in dire need of education and question that we need each other.

We need to understand at the root, the cause and effect of actions that affect lives. Furthermore, these memoirs are experiences that perhaps other female police officers across the country face each and every day.

Books similiar to Memoirs of Women in Blue: The Good, The Bad and No Longer Silent may be found in the categories below: