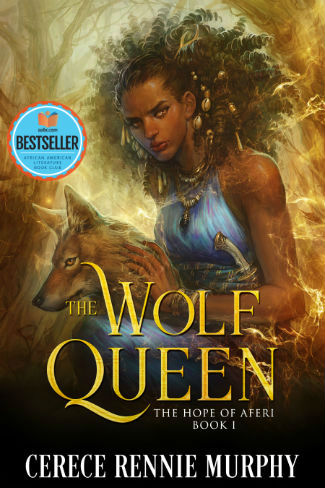 The Wolf Queen: The Hope of Aferi Book I
by Cerece Rennie Murphy

To fight for her future, she must first discover the magic of her past…

Once great and powerful sorcerers, the Amasiti were hunted to the brink of extinction by the Hir and his followers. For four hundred years, their legacy faded from memory waiting for the hope of Aferi to be renewed…

In the Land of Yet

At the edge of the Forbidden Forest

Forced to fend for herself after the brutal murder of her family, Ameenah Yemini has made a life for herself as a master tanner and farmer, only venturing into the world to earn her living then return to the safety and seclusion of her home.

And her careful life begins to unravel.

Drawn to the hidden magic that lingers in everything she touches, the new Hir insists on having her for himself, using the people around her to force Ameenah into his grasp.

When she realizes that her greatest enemy may hold the key to a secret she thought lost to her forever, Ameenah is determined to reclaim her stolen past. But, at what cost? As an ancient power waits to be unleashed, Ameenah’s choices will make the difference between awakening a new magic or delivering it into the hands of evil.

Books similiar to The Wolf Queen: The Hope of Aferi Book I may be found in the categories below: