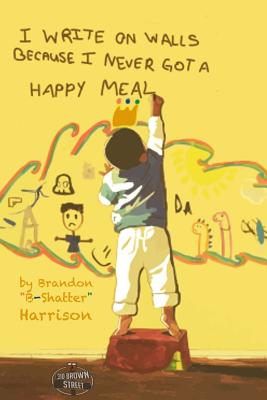 Paperback Description:
“I Write on Walls Because I Never Got a Happy Meal” is the first full length collection of poems from Brandon B. Shatter Harrison featuring hit pieces like Get Out, Dear Officer, Ben Carson and more. More than your average poet, B. Shatter has found a way totake his early slam career training from Texas to new and amazing heights in making a name for himself. B-Shatter is host of Kentucky’s largest yearly poetry competition the “Winter SoulSpitSlam,” coaches the youth team known as "Young Poets of Louisville," and regularly teaches while continuing to host a variety of slams and nationwide events. He’s been seen on HBO’s Brave New Voices 2008, competed on the 2010 Killeen Poetry Slam Team, the 2014 Loohavull Lip Slam Team Champion and performedat the 2016 Blues, Brews, and BBQ festival. This is just the beginning, there will always be stories that need telling and B. Shatter aims to give those tales a voice.

More books like I Write On Walls Because I Never Got A Happy Meal may be found by selecting the categories below: