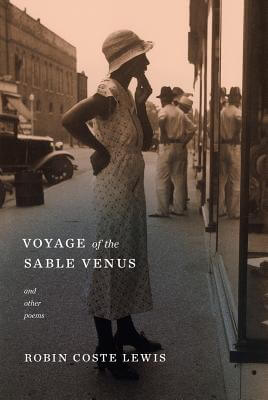 Voyage of the Sable Venus: and Other Poems
by Robin Coste Lewis

Hardcover Description:
A stunning poetry debut: this meditation on the black female figure throughout time introduces us to a brave and penetrating new voice.

Robin Coste Lewis’s electrifying collection is a triptych that begins and ends with lyric poems considering the roles desire and race play in the construction of the self. The central panel is the title poem, “Voyage of the Sable Venus,” a riveting narrative made up entirely of titles of artworks from ancient times to the present—titles that feature or in some way comment on the black female figure in Western art. Bracketed by Lewis’s autobiographical poems, “Voyage” is a tender and shocking study of the fragmentary mysteries of stereotype, as it juxtaposes our names for things with what we actually see and know. Offering a new understanding of biography and the self, this collection questions just where, historically, do ideas about the black female figure truly begin—five hundred years ago, five thousand, or even longer? And what role has art played in this ancient, often heinous story? From the “Young Black Female Carrying / a Perfume Vase” to a “Little Brown Girl / Girl Standing in a Tree / First Day of Voluntary / School Integration,” this poet adores her culture and the beauty to be found within it. Yet she is also a cultural critic alert to the nuances of race and desire and how they define us all, including herself, as she explores her own sometimes painful history. Lewis’s book is a thrilling aesthetic anthem to the complexity of race—a full embrace of its pleasure and horror, in equal parts.

More books like Voyage of the Sable Venus: and Other Poems may be found by selecting the categories below: