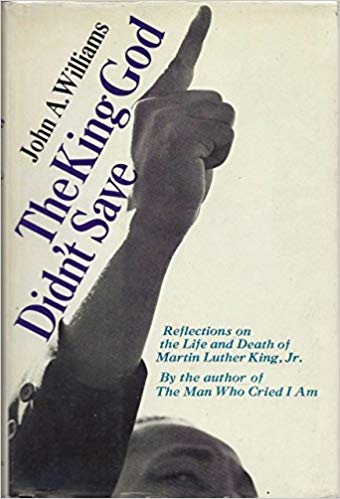 The King God Didn’t Save: Reflections on the Life and Death of Martin Luther King, Jr.
by John A. Williams

Biographers have begun to descend in force upon Martin Luther King, Jr., some to record the facts of his life and some to render judgment. Black novelist John A. Williams, whose sympathies are strongly pro-black power, anti-nonviolence, and anti-religion, falls into the latter category, for he has much to say about the mistakes and shortcomings of King’s leadership. But his unsparing portrayal of King’s career as public and private man also takes cognizance of King’s special greatness, his achievements, and his potential for growth. And as much as this is a study of King himself, it is also a study of “the awesome exercise of white power” that created and exploited his myth as the good black leader, blunted his actual effectiveness, pressured and threatened him over Vietnam and the Poor People’s March, and finally “cut King down in conspiracy, and then conspired to plug the memory of the man with putty.”

The first half of Williams’ book is a rough retracing of the course of King’s public life and the black movement, dotted with Williams’ personal recollections and political opinions. —