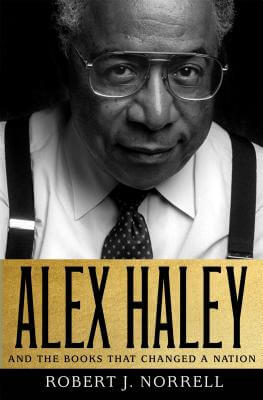 Alex Haley: And The Books That Changed A Nation
by Robert J. Norrell

Read Our Review of Alex Haley: And The Books That Changed A Nation

It is difficult to think of two twentieth century books by one author that have had as much influence on American culture when they were published as Alex Haley’s monumental bestsellers, The Autobiography of Malcolm X (1965), and Roots (1976). They changed the way white and black America viewed each other and the country’s history. This first biography of Haley follows him from his childhood in relative privilege in deeply segregated small town Tennessee to fame and fortune in high powered New York City. It was in the Navy, that Haley discovered himself as a writer, which eventually led his rise as a star journalist in the heyday of magazine personality profiles. At Playboy Magazine, Haley profiled everyone from Martin Luther King and Miles Davis to Johnny Carson and Malcolm X, leading to their collaboration on The Autobiography of Malcolm X. Roots was for Haley a deeper, more personal reach. The subsequent book and miniseries ignited an ongoing craze for family history, and made Haley one of the most famous writers in the country. Roots sold half a million copies in the first two months of publication, and the original television miniseries was viewed by 130 million people.

Haley died in 1992. This deeply researched and compelling book by Robert J. Norrell offers the perfect opportunity to revisit his authorship, his career as one of the first African American star journalists, as well as an especially dramatic time of change in American history.

More books like Alex Haley: And The Books That Changed A Nation may be found by selecting the categories below: