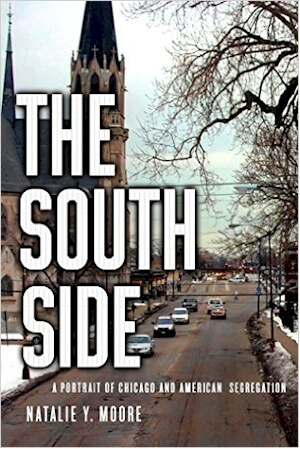 The South Side: A Portrait of Chicago and American Segregation
by Natalie Y. Moore

While mayors Richard M. Daley and Rahm Emanuel have touted Chicago as a “world-class city,” it remains one of the most segregated cities in America. And while it would be easy to think of a city with a billion-dollar park, Michelin-rated restaurants, waterfront views, world-class shopping, and a thriving theater scene as a model for other metropolitan areas, underneath the shiny façade lurks the horrible reality of deeply-rooted and destructive racial segregation.

Throughout The South Side, Moore shows that race—not class—determines the policies that perpetuate the city’s injustices. Shining a bright light on Chicago’s housing policies, its segregated schools (and lack of political will to integrate Chicago Public Schools), institutionalized practices that leave predominantly black neighborhoods vulnerable to crime and bad banking policies, Moore takes readers inside a system that keeps a segment of the city’s population from having a chance at the American Dream.

In The South Side, Moore uses her skills as a conscientious reporter to showcase the lives of these those living in these underserved communities. Through intimate stories and investigative research, The South Side highlights the impact of Chicago’s historic segregation – and the ongoing policies that keep the system intact.

For any interest in receiving a copy for review or excerpt consideration, or if you’d like to set up an author Q&A, please let me know. We are also happy to provide copies to giveaway on social media, should that be of interest to you!

Books similiar to The South Side: A Portrait of Chicago and American Segregation may be found in the categories below: