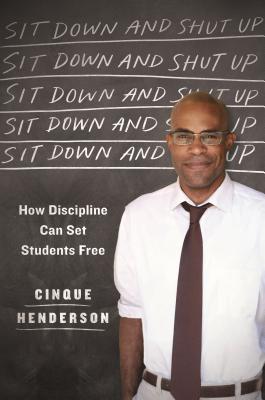 Sit Down and Shut Up: How Discipline Can Set Students Free
by Cinque Henderson

Hardcover Description:
An insider’s account of teaching the most difficult kids inside America’s most challenging schools

On his very first day of school as a substitute teacher, Cinque Henderson was cursed and yelled at by a class of 11th graders. One kid in particular, big enough to be a linebacker, openly threatened him. The student was spoiling for a fight. Cinque, not wanting trouble or any broken bones, called the hall monitor, who escorted the student to the office. But five minutes later the office sent him back. He was carrying a note that he handed to Henderson with a scowl. It read simply enough, “ok to return to class.” The student sat glowering at Henderson for the rest of the day. But it didn’t matter, Henderson had already lost control of his charges and there was nothing more to be done. That was it: no suspension, no detention, no phone call home, no picking up trash after school, no sidebar conversation with the office to figure out how they could intervene. In the generation since Henderson had gone to public school in a poor black town in the rural South, the world had undergone dramatic change.

Sit Down and Shut Up: How Discipline Can Set Children Free, part memoir, part jeremiad, is a passionate and personal analysis of that change, the story of Henderson’s single year as substitute teacher in some of America’s toughest schools. Henderson found that the culprits for the failures of our worst schools weren’t some endless stream of unqualified teachers, protected by tenure and coasting along on long ago laurels, but rather the result of population in crisis: students who thumbed their noses at teachers, cursed and threatened them and a school system and a political culture that turned a willfully blind eye to the economic and social decline that created the crisis. He soon came to see that beyond the sound and fury of adolescent misbehavior, the four corners of a public school classroom were hothouse laboratories/microcosms?chaotic, teeming, vibrant, tough?of all our nation’s most vexing issues of race and class. Beneath the surface, the legacy and stain of race?the price of generational trauma, the cost of fatherlessness, the failures of capitalism, the false promise of meritocracy?played itself out in every single interaction he had with an aggressive student or unengaged parent or a failed administrator.Henderson also found solutions, namely a recommitment to the notion that discipline?emotional, psychological, behavioral and moral discipline?wisely and properly understood, patiently and justly administered?was the only proper route to freedom and opportunity for generations of poor youth. Ranging from the Declaration of Independence and Black Lives Matter, to Whitney Houston and Walt Whitman, Henderson has managed a profound, oft times funny, but always poignant meditation on freedom, the promise of democracy and the very nature of human consciousness.

Books similiar to Sit Down and Shut Up: How Discipline Can Set Students Free may be found in the categories below: