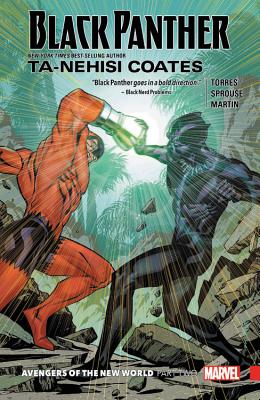 Book Description:
Klaw stands supreme! The Black Panther’s greatest foe has returned, ready for war! Can T’Challa fi nally defeat Ulysses Klaw, the man who killed his father, while his country threatens to rip itself apart? To make matters worse, Wakanda’s gods disappear - and the Originators return! The former gods are back, but what are their intentions for a land that has forgotten them? And all this is only the beginning, as a cadre of villains returns, monsters pour through strange gateways and Wakanda is brought to its knees! T’Challa must defend his country from within - but with his hands full, who will come to Ayo and Aneka’s aid? And as Klaw steals the very lifeblood of Wakanda, the Panther turns to unlikely allies. Who will join the king’s ill-fated crusade? The answers will surprise you!

More books like Black Panther Book 5: Avengers of the New World Part 2 may be found by selecting the categories below:

Tell us what do you think about Black Panther Book 5: Avengers of the New World Part 2.