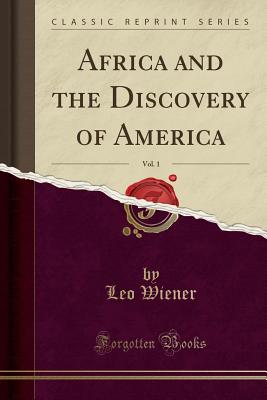 Africa and the Discovery of America, Vol. 1
by Leo Wiener

Paperback Description:
Excerpt from Africa and the Discovery of America, Vol. 1

While working on a Comparative Grammar of Ameri can Languages, I was confronted with a number of words which seemed to observe perfectly the phonetic laws, indicative of extreme old age, and yet were obviously introductions from Europe after the discovery of America. I intended to deal with this phenomenon in half a dozen pages, when it occurred to me that the cul tural in?uences of Europe upon the Indian languages needed a far more thorough examination than they had been subjected to. When I began my scrutiny, I was firmly convinced, as is the universal belief, that tobacco, manioc, yams, sweet potatoes and peanuts were bless ings bestowed upon the world by the Indians. A cursory study excluded the yams and the manioc. Soon the peanuts followed in their wake. Next came the sweet potatoes, and at last the tobacco. It turned out that American archaeology was to a great extent built on sand. But the most painful discovery was in the line of Indian religion. Here everything turned out to be topsy-turvy.

In this first volume I show that the Negroes have had a far greater in?uence upon American civilization than has heretofore been suspected. In the second volume I shall chie?y study the African fetichism, which, even with the elaborate books on the subject, is wofully misunderstood, and I shall show by docu mentary evidence to what extraordinary extent the Indian medicine-man owes his evolution to the African medicine-man, who, in his turn, derives his wisdom from the popular Arabic medical science and religion.

More books like Africa and the Discovery of America, Vol. 1 may be found by selecting the categories below: