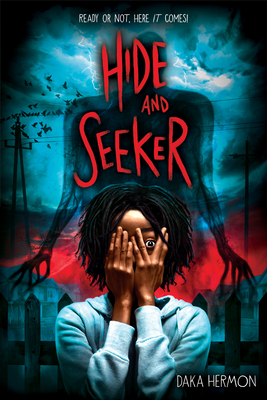 Hide and Seeker
by Daka Hermon

One of our most iconic childhood games receives a creepy twist as it becomes the gateway to a nightmare world.
I went up the hill, the hill was muddy, stomped my toe and made it bloody, should I wash it?

Justin knows that something is wrong with his best friend.Zee went missing for a year. And when he came back, he was … different. Nobody knows what happened to him. At Zee’s welcome home party, Justin and the neighborhood crew play Hide and Seek. But it goes wrong. Very wrong. One by one, everyone who plays the game disappears, pulled into a world of nightmares come to life. Justin and his friends realize this horrible place is where Zee had been trapped. All they can do now is hide from the Seeker.

Something is wrong with twelve-year-old Zee, who has returned after a year’s absence; nobody knows where he was or what happened to him, but now he is distracted and violent, freaking out when he sees his friends, Justin, Nia, and Lyric, playing an odd game of hide-and-seek, and talking wildly about some danger that is approaching—and soon his friends are pulled into a shadowy world ruled by a monstrous, shape-shifting Seeker, forced to play a terrifying game of hide-and-seek where they will have to confront their worst nightmares in order to find their way home.

Books similiar to Hide and Seeker may be found in the categories below: