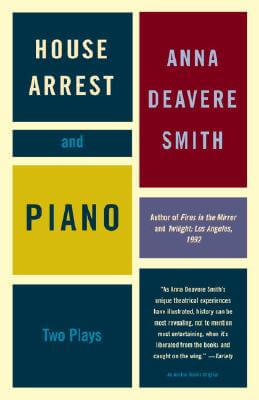 In the provocative and at times bitterly funny play House Arrest, Smith examines the relationships between a succession of American presidents and their observers in and out of the press. Arcing from Clinton and Monica Lewinsky to Jefferson and Sally Hemings and alive with the voices of such real-life figures as Ed Bradley, George Stephanopoulos, Anita Hill, and Abraham Lincoln, the result is a priceless examination of the intersection of public power and private life.

In Piano, Smith casts her gaze back a century as she follows the tangled lines of race, sex, and exploitation in a prosperous Cuban household on the eve of the Spanish-American War. Deftly and suspensefully, Smith tells a story of ruptured allegiances and ramifying deceptions in which no one—master or servant, friend or enemy—is what he or she pretends to be. Together these two plays are further proof that Anna Deavere Smith is one of the most searing and revelatory voices in the American theater.

More books like House Arrest and Piano: Two Plays may be found by selecting the categories below: