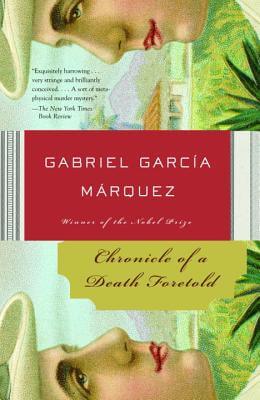 Chronicle of a Death Foretold
by Gabriel Garcia Marquez

Book Description:
A man returns to the town where a baffling murder took place 27 years earlier, determined to get to the bottom of the story. Just hours after marrying the beautiful Angela Vicario, everyone agrees, Bayardo San Roman returned his bride in disgrace to her parents. Her distraught family forced her to name her first lover; and her twin brothers announced their intention to murder Santiago Nasar for dishonoring their sister.
Yet if everyone knew the murder was going to happen, why did no one intervene to stop it? The more that is learned, the less is understood, and as the story races to its inexplicable conclusion, an entire society—not just a pair of murderers—is put on trial.

More books like Chronicle of a Death Foretold may be found by selecting the categories below: