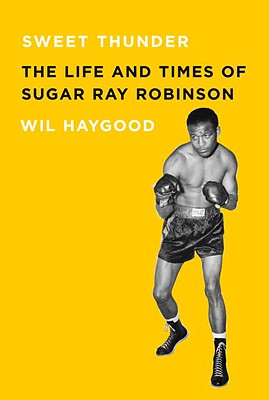 Book Description:
From the author of the critically acclaimed In Black and White: The Life of Sammy Davis, Jr., comes another illuminating socio-historical narrative of the twentieth century, this one spun around one of the most iconic figures of the fight game, Sugar Ray Robinson.

Continuing to set himself apart as one of our canniest cultural historians, Wil Haygood grounds the spectacular story of Robinson’s rise to greatness within the context of the fighter’s life and times. Born Walker Smith, Jr., in 1921, Robinson had an early childhood marked by the seething racial tensions and explosive race riots that infected the Midwest throughout the twenties and thirties. After his mother moved him and his sisters to the relative safety of Harlem, he came of age in the vibrant post-Renaissance years. It was there that—encouraged to box by his mother, who wanted him off the streets—he soon became a rising star, cutting an electrifying, glamorous figure, riding around town in his famous pink Cadillac. Beyond the celebrity, though, Robinson would emerge as a powerful, often controversial black symbol in a rapidly changing America. Haygood also weaves in the stories of Langston Hughes, Lena Horne, and Miles Davis, whose lives not only intersected with Robinson’s but also contribute richly to the scope and soul of the book.

From Robinson’s gruesome six-bout war with Jake "Raging Bull" LaMotta and his lethal meeting with Jimmy Doyle to his Harlem nightclub years and thwarted show-biz dreams, Haygood brings the champion’s story, in the ring and out, powerfully to life against a vividly painted backdrop of the world he captivated.

More books like Sweet Thunder: The Life and Times of Sugar Ray Robinson (Borzoi Books) may be found by selecting the categories below: