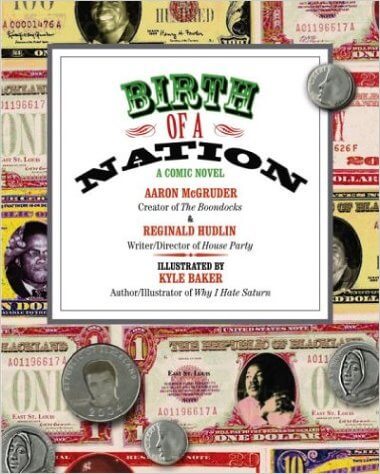 Birth of a Nation: A Comic Novel
by Aaron McGruder

Book Description:
This scathingly hilarious political satire—produced from a collaboration of three of our funniest humorists—answers the burning question: Would anyone care if East St. Louis seceded from the Union?

East St. Louis, Illinois (“the inner city without an outer city”), is an impoverished town, so poor that Fred Fredericks, its idealistic mayor, starts off Election Day by collecting the city’s trash in his own minivan. But the mayor believes in the power of democracy and rallies his fellow citizens to the polls for the presidential election, only to find hundreds of them turned away for trumped-up reasons. Even sweet old Miss Jackson—not to mention the mayor himself—is denied the vote because her name turns up on a bogus list of felons. The national election hinges on Illinois’s electoral votes and, as a result of the mass disenfranchisement of East St. Louis, a radical right-wing junta led by a dim-witted Texas governor seizes the Oval Office.

Prodded by shady black billionaire and old friend John Roberts, Fredericks devises a radical plan of protest: East St. Louis will secede from the Union. Roberts opens an “offshore” bank (albeit in the heart of the U.S.) to finance the newly liberated country, and suddenly East St. Louis becomes the Switzerland of the American heartland, flush with money. It also begins to attract a motley circus of idealistic young militants, OPEC-funded hitmen, CIA operatives, tabloid reporters, and AWOL black servicemen eager to protect and serve the new nation.

Problems set in almost immediately: Controversies rage over the name and national anthem of the new country (they decide on the Republic of Blackland with an anthem sung to the tune of the theme from Good Times), and local thug Roscoe becomes a warlord and turns his gang into a paramilitary force. When the U.S. military begins to move in, Fredericks is forced to decide whether his protest is worth taking all the way.

Birth of a Nation starts with a scenario drawn from the botched election of 2000 and spins it into a brilliantly absurd work of sharply pointed satire. Along the way the authors lay into a host of hot social and cultural issues—skewering white supremacists, black nationalists, and everyone in between—drawing real blood and real laughs in equal measure in this riotous send-up of American politics.

More books like Birth of a Nation: A Comic Novel may be found by selecting the categories below: