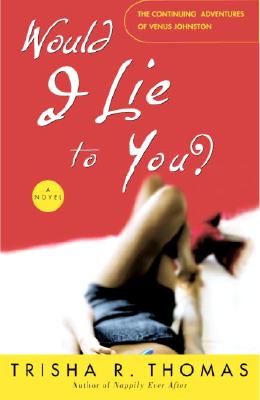 Would I Lie to You?
by Trisha R. Thomas

Book Description:
Spirited, successful Venus Johnston is back—in the long-awaited sequel to "Nappily Ever After.
Venus feels history repeating itself, and she’s not loving it. She ended a relationship with Clint because he couldn’t commit, cut off her long, processed hair, and started on a new path with a new boyfriend. But she’s been with Airic for more than two years, and they still haven’t set a wedding date. When a temporary project takes her to Los Angeles, Venus welcomes the opportunity to spend some time with her family in California and to see if a little absence makes Airic’s heart grow fonder. But in L.A., savvy, ambitious Venus runs head-on into a new complication—the equally savvy and ambitious Jake Parsons, a former rap star turned clothing designer. Jake’s as suave as he is successful, and ten years her junior. Venus’s job is to create a marketing campaign for his urban wear. Jake’s job, it seems, is to distract her from her long-distance romance with Airic.
When Venus’s mother is diagnosed with breast cancer, her entire world seems to crumble. Everything she thought would make her happy—her new look, her successful career, her fiance—can’t fix the sadness and emptiness she feels. But before she throws in the towel, she’s offered one more chance, a chance for change, for growth, and maybe even for a new love. Will she take it? Or give in to the notion that her life will always be close but no cigar? Moving, romantic and inspiring," Would I Lie to You? is one woman’s happy, lighthearted story of giving in instead of giving up.

More books like Would I Lie to You? may be found by selecting the categories below:

Tell us what do you think about Would I Lie to You?.